The Christograms and the Monogram of Christ

The arrival of Christ defines a clear dividing line in history. It originated an uninterrupted succession of events that have influenced the cultural contest of Europe until now. Some examples are the birth of the Church; early Christian, Lombard and Byzantine periods; the Catholic civilization during the Middle Age; the discovering of America…

Nevertheless, the profession of the Christian faith has been opposed for a long time. In fact, the first believers were subjected to violent persecutions in the Jewish territory, as reported by the Acts of the Apostles. Some examples are the persecutions by Herod Agrippa, during which the first Christian martyr, Stephan, was killed.

Persecutions in the Roman Empire

These were the dawns of the first Christian communities, which spread clandestinely all over the Roman Empire. Although initially they were accepted – Christianity was considered by pagans like atheism, a superstitious fanaticism or an extremist sect of Jews – the first contrasts with the emperor started after the fire of Rome in 64 AC, under Nero. Christians were accused, rightly or wrongly, to have started the fire [1] and so they were condemned. Among them, the apostles Peter and Paul suffered martyrdom [2].

In his Annales [5], Tacitus reports a clear and tragic image of the persecutions: “those who died were also mocked: wrapped in animal skins so that they died torn by dogs or crucified or soaked in oil then hung on a post and set on a fire”. It is also famous the statue of the Colossus of Nero. It was erected near the vestibule of the Domus Aurea and Christians were obliged to worship it. Moreover, the Colossus is also linked to the meaning of the number of the beast 666.

From then, Christians were violently persecuted for several centuries. These persecutions reached a climax under the emperor Diocletian. Several testimonies of the heinous tortures come from the writings of Lactantius [2], Eusebius [3] and Pliny the Younger [4].

The hostilities between the civil and religious pagan authorities obliged Christians to adopt accurate survival strategies. It was not possible to celebrate the cult freely, it was the time of the Domus Ecclesiae and the catacombs. Hence, the early Christian messages were conveyed secretly. So, a big variety of symbols originated for this purpose: the representations of a Berdless Christ, the most complex Christograms and many others.

The term “Christogram” is a combination of Greek or Latin words indicating the name of Jesus. Christograms were known only among the members of a close cultural circle, and they had a wider cult meaning, not immediately perceptible. Among them, the Chi Rho, Ichthys and the Trigram IHS are investigated.

The persecutions against Christians officially ended the 30th of April 311, when Galerio issued the Edict of Tolerance. Shortly thereafter, the events concerning the emperor Constantine took place: his victory against Maxentius in the battle of the Milvian Bridge (312) and the Edict of Milan (313) that guaranteed the so desired freedom of worship to Christians.

Nonetheless, cause to their simplicity and elegant symbolisms, Christograms were used also in the subsequent centuries, obtaining a great popularity during the Middle Age.

Also known as CHRISMON or Monogram of Christ, it is formed by a X and P overlapped, from the initials of the word Χριστός’ (Khristòs) that could be faithfully translated as “Messiah”.

On the sides of the figure there are the Greek alpha and omega letters, the Beginning and the End of the Apocalypse. Christ is the start and the end of everything.

The Chi Ro originated in the 3rd century AC for private use and it was used publicly after the Edict of Milan by the emperor Constantine, at the end of the Christians persecutions.

Since then, the symbol was placed on the Roman labarum, the banner which accompanied the emperor during the battles. Hence, the symbol became the sign of conversion of the Roman Empire to Christianity.

The term ichthys is the Latin translation of the Greek word ἰχϑύς, meaning “fish”.

Figuratively they are two semicircles which intersect each other, forming a stylized fish.

The reasons of the worship of the symbol by Christians, as figure of Christ, are found in the Gospels. In fact, Luke 5,10 tells “Don’t be afraid; from now on you will fish for people”. It is the invitation by Christ to detach from all that man owns, for evangelization.

Recent studies speculate that the symbol could derive from a rewrite of the most ancient symbol of the Vesica Piscis.

The Trigram IHS (ΙΗΣ in Greek) originated in the 3rd century as sacred appointment, as abbreviation in the Greek manuscripts of the Old Testament. Simply, the symbol shortens the name of Jesus: ΙΗΣΟΥΣ. IHS is also the acronym of the sentence “In Hoc Signo vinces”. The historian Eusebius [3] tells this writing appeared on a vision to Constantine, beside a cross, before the battle of the Milvian Bridge.

The wider spread of the IHS took place in the Middle Age, when Saint Bernard of Clairvaux, who defined the Rule of the Cistercians and Templars, was the main promoter. Since the 15th century, by the will of the pope Martin V, the symbol is represented as a cross placed over the central letter. 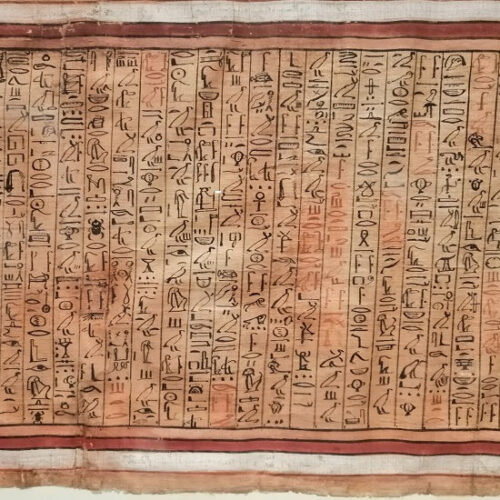 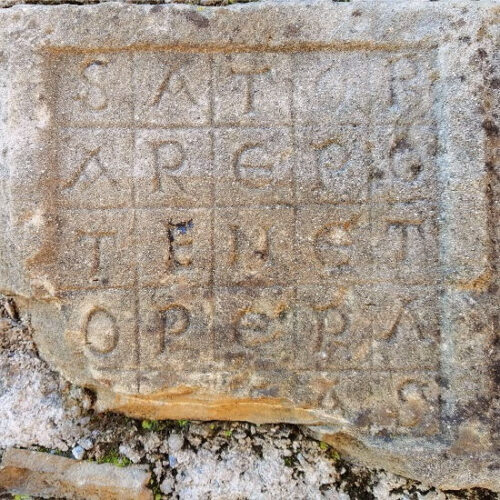 The Sator Square of the Brusaporto Castle 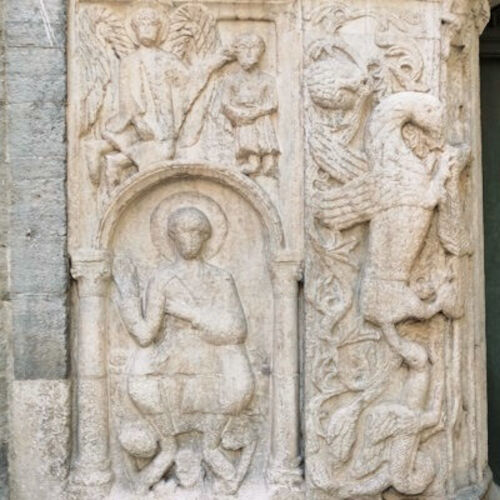 The Comacine Masters and the symbolic art in Como

🔶 A walk in the Gothic Cistercian abbey of Foss

🔶 The extraordinary scenic presence of the Spol