The magic symbolism of Ferrara

The symbolism of the Ferrara Cathedral

During the historical events that have happened in Ferrara for many centuries, an interesting system of symbols and sacred geometries developed. The Cathedral of San Giorgio is the greatest manifestation of this period. The church was built in 1135 after the prince Giocoli had obtained the building permit by the antipope Anacleto II. It was an very unusual fact! Although revisited over time, the original structure is Romanesque, as attested by the white marble three pinnacles facade. The uncompleted bell tower  is by Leon Battista Alberti.

The facade: the dualism between good and evil

A majestic prothyrum, ideally supported by statues of lions and telamons, is located in the centre of the facade. On the prothyrum there is a canopy with the statue of the Virgin Mary with the baby Jesus. At the tympanum there is the representation of Christ (at the centre), the Virgin Mary and St. Joseph kneeling on both sides, in the act of interceding for the sinful humanity. Under the tympanum a representation of the Universal Judgement is carved: on a side, the damned go to hell while they are being devoured by a figure with monstrous features; on the other side the figures are received in Heaven by Abraham.

In general, the decorative structure of the facade is shaped according to the atavic conflict among Good and Evil. The human being and his behaviour are weighed by God. This is a concept figuratively expressed through the weighing of souls, called psychostasia by ancient Egyptians.

Whether God considers fair the person who judges, then he will deserve the Heaven.

Otherwise, he becomes prey of monsters and hellish punishments; it is the fate of people who have abandoned the intellect and who are dominated by the passions of the flesh.

The dualism between the Good and the Evil is expressed at the level of the Ferrara Cathedral main gate. There, a series of friezes represents the features of some creatures and monsters. 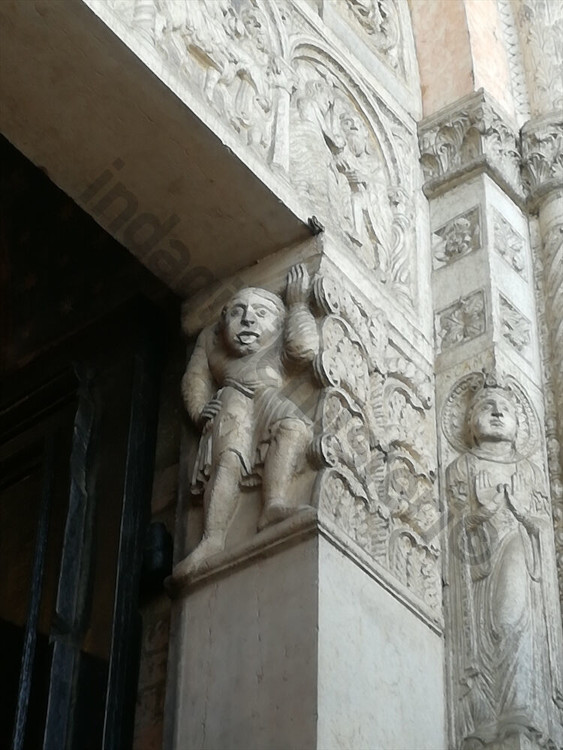 The right side wall

The right side of the Ferrara Cathedral, that looks out the Piazza Trento and Trieste, is of particular interest. In ancient times there was a second entrance, used by pilgrims going to Rome. The gate, unfortunately destroyed in the 18th century, was full of precious friezes representing the months of the year, so it was called “Porta dei Mesi”. The author’s name of these friezes is still mysterious, thus he is known as Maestro dei Mesi.

Next to the Porta dei Mesi there were some column-bearing hippogriffs, today placed outside the Cathedral.

On the right side wall, there are two loggias with carved columns with a relevant symbolist meaning. In fact, the colums, probably a work of the Comacine masters, are knotted. The ophitic columns (from the Greek òphis, snake), or knotted, is an uncommon decorative element with a strong symbolistic value. However, the meaning is still unknown and debated. It is possible that the ophitic colums, in their most interpretative semiotic meaning, indicate the tie of the Holy Trinity, where the Father (God) and the Son (Christ) are linked by the knot of the Holy Spirit. This hypothesis would be supported by the cultural-religious context, where the construction of the Cathedral of San Giorgio is embedded.

Internal part and atrium of the Ferrara Cathedral

Some important architectural elements are located inside the Ferrara Cathedral, precisely as the columns base of the 13th century original prothyrum, positioned in the atrium. They have column-bearing lions and knotted columns. 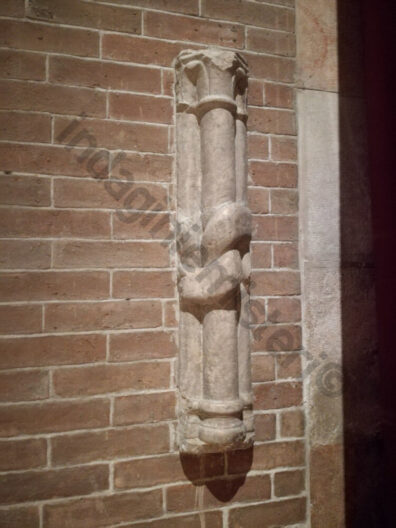 It is also the case of the sarcophagus belonging to a controversial man of Ferrara, whose history is at the same time sad and fascinating. Frate Armanno, known as Pungilupo, was venerated during his life as a curer and a man of great faith. However, after his death (1269) some inquisitors of the Beggar order doubted if he was  heretical because during his youngness Frate Armanno had been a Cathar. Hence, an incredible judicial paradox raised, so two simultaneous processes were held: one to demonstrate the holiness of the friar, the other for proving the heretical nature of his predication.

Initially, Armanno was declared a saint but later the 23rd of March 1301 as a heretic. The damnatio memoriae removed any form of the saint’s worship, whose remains were exhumed and burned by pope Boniface VIII.