The magic symbolism of Ferrara

Today Ferrara is the keeper of an important and diversified Renaissance heritage: from the noble palaces to the masterful Este Castle, from the extraordinary Cathedral of San Giorgio to the innovative urban structure, each element seems to be permeated by history and beauty. The city has also a mysteric atmosphere, trapped in complex systems of symbols that occasionally appear in the facade of some historical buildings or in mysterious popular legends. 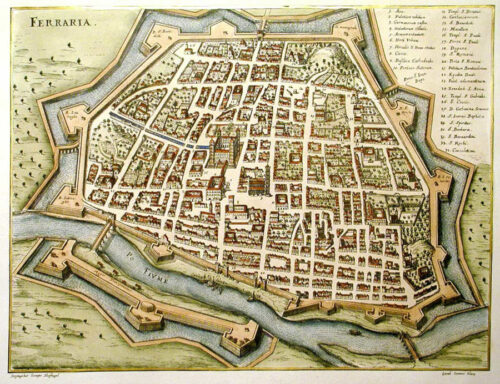 Etymology of the name

The etymology of the name Ferrara is still permeated by mystery. A famous legend tells that the city was founded by a colonist named Mark. The toponym Ferrara could derive from the Troian woman Frara, who was part of Mark’s expedition. Along the same mythological line, some scholars suggest the idea that Lady Frara’s face may have been carved on the facade of the Ferrara Cathedral, above the right-minor gate.

Probably, the Ferrara name derives from the spelt, richly cultivated by Romans along the river Po, especially its delta, where the city is still located.

The origins of this Emilian city are from the 6th-7th century, when the episcopal headquarter of Voghenza was devastated due to the continuous invasions of the Barbarians and then it was moved to the current Ferrara area. After, the city was firstly part of the Byzantine exarchate. Then, It has belonged to the Lombards and to the Franks for a short period. In 1135 the Cathedral of San Giorgio was consecrated, becoming the headquarter of the bishop and an extraordinary example of the Gothic-Romanesque art.

During the 12th and the 13th century Ferrara was involved in the fights between Guelph and Ghibelline, that led to the establishment of a duchy ruled by the Este family, who has governed the city for three centuries. Its main characteristic was an artistic and cultural tradition that saw the presence of artists like Leon Battista Alberti, Piero della Francesca, Andrea Mantegna and after Torquato Tasso, Ludovico Ariosto, Giovanni Bellini and Tiziano.

The construction of the Este Castle dates back to 1385 by the architect Bartolino da Novara. It is curious that the building was commissioned by Niccolò II d’Este to defend himself from the popular uprising of the own Ferrara inhabitants. The Este Castle was completed in a short time and today represents the symbol of the city.

The Herculean addition and the end of the independence

In 1492 Ercole I d’Este commissioned to Biagio Rossetti the expansion of the urban structure known as Herculean Addition, one of the first example of the town planning in Europe. The intervention predisposed the construction of a large fortified walls.

In 1598 the Este dynasty ends due to the lack of heirs by Alfonso II, and Ferrara became a dominion of the Papal state of Clement VIII. In the following centuries the city has started a slow decline until the annexation to the Kingdom of Sardinia in 1859 and to the rising Kingdom of Italy.